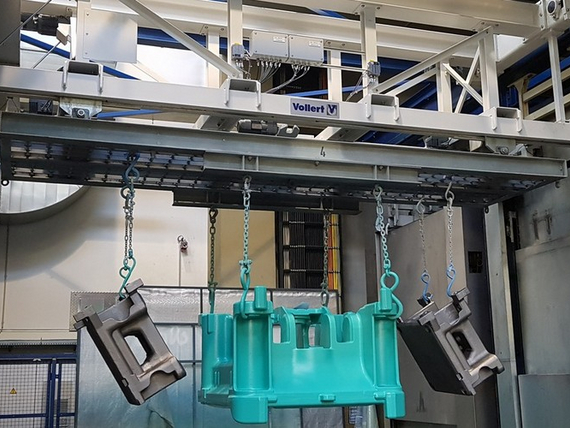 In a comprehensive retrofit project, the intralogistics specialists from Vollert modernized the complete conveyor technology of an existing large parts painting plant for the injection moulding machine manufacturer Arburg. While retaining the existing crane runway and painting technology, the processes were accelerated, the painting processes improved and automated and extended parts of the plant technology were added.

The Arburg family business is one of the world's leading manufacturers of high-quality injection moulding machines for plastics processing. In the third generation, the company now employs around 2,500 people throughout Germany, and a further 500 are added at a total of 34 locations worldwide. The heart and company philosophy is the central machine production at the main location in Lossburg in the Black Forest. Arburg manufactures all key components itself, with a nontypical market share of in-house production of around 60%.

Arburg was no longer satisfied with the quality and performance of the painting plant when coating machine parts, even in special colours if requested by the customer. The system suffered from heavy wear, among other things due to inaccurate transport rail transitions. The workpieces, some of which weighed tons began to vibrate, placing additional stress on the supporting structure. In the end, the plant could therefore no longer be run with a full load. The lifting and drive concept also relied on heavy chain drives, which resulted in high noise levels during operation. Modernization was therefore indispensable. Arburg was looking for a suitable retrofit expert - and found Vollert.

Vollert's engineers are experts in heavy-duty intralogistics. The long-established company from Weinsberg is specialized in solutions for moving and conveying heavy loads, whether on the ground or at lofty heights. The range of services includes heavy-duty high-bay warehouses, stacker cranes and special crane systems for large parts up to 100 tons, in the aluminium and steel industry, in automobile production or in large parts painting plants worldwide. The replacement of obsolete or failure-prone plant components is at least as demanding as the planning of new plants, because the modernization of obsolete plant technology often presents major challenges for many industrial companies. In many cases, the documentation is incomplete, components are no longer available and access is also considerably more difficult due to the existing production areas. Thanks to decades of experience in this complex subject, the retrofit specialists at Vollert know all the techniques and their weak points - and provide remedy.

After an in-depth analysis, the experts recommended a significantly modified conveying concept for the Arburg paint shop: Instead of chain drives, Vollert often relies on friction wheel technology for high loads in paint shops. As early as 2008, the engineers had introduced this conveying principle for the first time for the construction machinery manufacturer Liebherr in an overhead-guided painting plant for components weighing up to 50 tons. Numerous comparable new systems for numerous manufacturers of large parts, such as excavators, cranes or large gearboxes have since followed. In addition to the drive system, the complete control system of the Arburg paint shop was also renewed and the customer's ideas and suggestions for improved control processes and traverse suspensions were implemented in conjunction with the customer. With success: Arburg's modernized paint shop has been running smoothly since August 2018.

At Arburg, injection moulding machine parts up to a weight of 5.5 tons are coated. Several parts are suspended from a carrier unit and driven together through the 40 m long painting plant. Six workstations and cabins are arranged parallel to each other on the right and left of a central distribution manipulator in the system layout. This takes over the carrier units from a lifting manipulator at the beginning of the system, runs them to the desired cabin and pushes the carrier unit in there. The carrier units are fed by the stationary friction wheel drives outside the cabins, so that there are no electrical drives within the explosion-protected areas. Thanks to the stationary friction wheels and distribution manipulators, the workpieces can be individually controlled. Stopping, diverting, overtaking and reversing are possible at any time and the travel speeds can be selected at will. During machining of the workpiece, the distribution manipulator takes over further transport movements of other workpieces and, at the end, the workpiece is returned to the loading and unloading manipulator. The carrier units consist of stable grid frames, into which the workpieces can be placed variably according to their size and number.

Parallel to the conveyor technology, Vollert also brought the control system up to date. This is a self-sufficient system for controlling the processes from a control station, with interfaces for coating and drying. Arburg has a total of three drying and buffer stations, a wet paint shop and an evaporation booth. After the workpieces have been transferred from the lifting manipulator to the distribution manipulator, further operation continues automatically, as well as after each completion of a work step and acknowledgement by a worker. In the original system, this was still controlled manually. The loading and unloading area of the painting plant now also has two manipulators for picking up and removing the workpieces. These are equipped with lifting technology to lift the heavy carrier units with the workpieces to the level of the distribution manipulator's raceway.

In the interaction of all measures - the new drive concept, the automated processes, the plant expansion and the higher travel speeds - the processes were ultimately considerably accelerated. Overall, the modernized plant achieves around 20% shorter throughput times than before thanks to Vollert's retrofit concept. 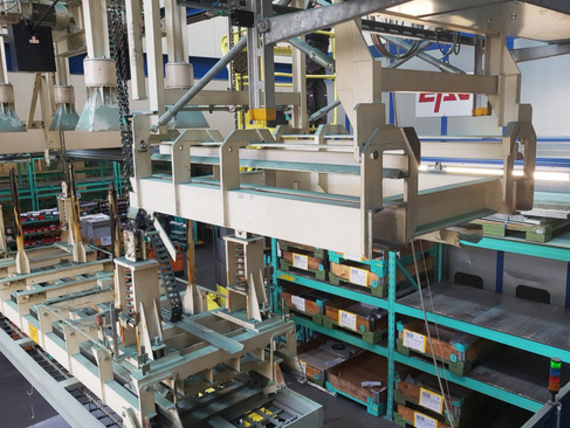 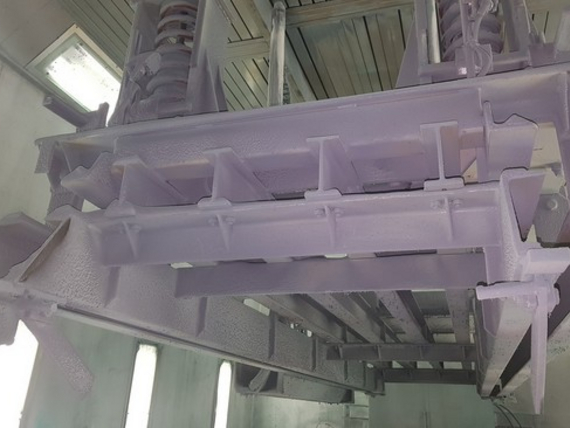 Further information on cookies can be found in our data protection declaration.